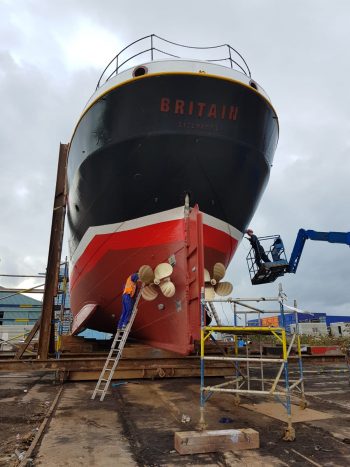 One of the stand out projects that Clements Engineering has been working on recently has been the restoration of a vessel that has been renamed HMY Britain. The vessel has had an interesting history since its build and the Clements Engineering team have worked with those involved in this project to ensure optimum design for the propellers and stern gear.

The 100 ft vessel was originally built in 1910 in Dublin Dockyard as a Lightship and named ‘Penguin’. Weighing in at approximately 400 tonnes costing £7,230 she was in service until 1966. Then renamed ‘Hallowe’en’ she was used as a Youth Adventure Sea Training vessel until she changed hands in the early 1980s, converted to a three mast schooner and renamed ‘Arctic Penguin’. In 1995 it became a Maritime Museum tied up at the pier in Inveraray on Loch Fyne where it resided until it was bought by Viscount Christopher Wright with the intention of full restoration to a three mast motor yacht in 2015.

After extensive searches to find a suitable shipyard she was moved in August this year to Bromborough to the Carmet Marine yard to begin the restoration.

The vessel was taken out of the water and onto the slipway where work could begin in earnest in removing all the detritus from the hull ready for rivet inspection and, where necessary renewal. The stern gear was examined, and measurements taken before Clements Engineering manufactured new stern gear and propellers to match the two new engines and gearboxes.

It was during this period that the owner negotiated with the appropriate authorities and the ‘Arctic Penguin’ was duly renamed ‘HMY Britain’.

In the coming weeks the vessel will be refloated and moved alongside the recently dredged dock at Carmet Marine ready for the next stage in its restoration.

Clement Engineering Managing Director, Paul Williams commented, “This vessel certainly has a great history and we are pleased to be involved in the project that sees this vessel continue it’s life afloat. We are looking forward to seeing the progress as the restoration completes.”