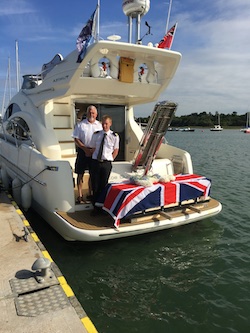 We have been part of solving a mystery on a boat which provides a unique service to people – Burials at Sea.  It is recognised that burial at sea is a long-established tradition in the UK, particularly for those who have been associated with the sea, and the service provides either burials or scattering of ashes for those who wish.

The boat, an Azimut 42, found that their propeller was rapidly corroding. They also had various electrical faults on the boat that had suddenly appeared following some bad weather.  Clements had been asked to adjust and clean the propellers, but issues continued, and the performance was not as it should be, so the technical team were approached again to help find a solution.

What they found was that the boat had suffered a lightning strike, which had damaged the boat in such a way, the anode protection system had broken down and hence the propeller was being corroded.

The Clements team worked with the boat owners and operators to help with their insurance claims, on the technical aspects of the damage that had been caused.

Having found a solution, Clements has also made the boat new customised Hyperform 4 blade propellers to replace the damaged set so that the boat can continue to operate smoothly and efficiently providing a unique and special service in the Solent area.

The technical team at Clements have a wealth of knowledge on aspects of boat build and design, which means they can work to understand how the propeller and stern gear or a boat can best help its performance. Please contact the team if you are experiencing any issues, such as vibration, lack of speed or any other propulsion-related issue.