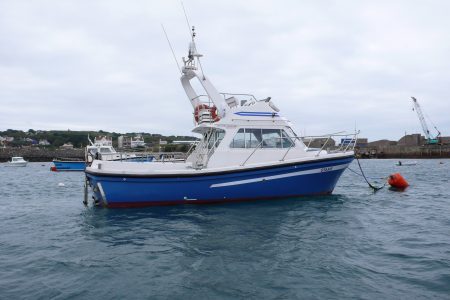 ‘Otarie’, a Lochin 333 Harbour Pilot, is owned by Sea Star Survey based in Southampton operating as an offshore survey vessel around the UK coastline and the near continent.

This vessel was originally installed with twin Perkins Sabre 300Ti engines which had reached end of life and a decision to re-engine the vessel was made earlier this year. The operational nature of ‘Otarie’ is such that she normally has a service speed of around 5-7 knots deploying sensitive electronic equipment across the seabed therefore her speed potential was secondary to her operational day to day use. The decision was made to install refurbished Perkins 6.354 engines rated at 120hp each which will happily provide a transit speed around 10-12 knots on passage and a minimum speed of 5 knots compatible with operational requirements. For the owners this is a win-win scenario with significantly reduced capital cost in replacing the engines and lower fuel consumption from the non-turbo charged engines.

A part of the process which is being undertaken at Lochin Marine International Ltd boat yard in Newhaven, Clements Engineering were consulted to provide a propeller solution that would see the prime objectives achieved. With their knowledge and expertise, they have designed an efficient propeller solution achieving the full engine potential at maximum output but still providing slow speed service performance as determined by the customer.

Following their calculations Clements designed and manufactured a pair of 21” 3 bladed hyperform propellers to achieve the client’s requirements.

Simon Thomas Lochin’s MD comments – “propeller design is a black art and Clements have a wealth of experience even when challenged with difficult installation scenarios – they are a ‘one-stop-shop’ as far as we are concerned”.

Clements Engineering will be exhibiting at the Marine Equipment Trade Show 19 – 21 November in Amsterdam where they can be found on stand 03.421.