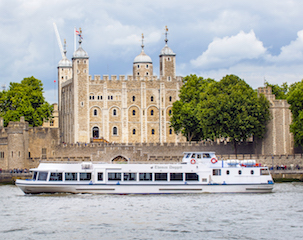 The new 36.42m long boat with a 9m beam will be captained by fully qualified Watermen. The Thomas Doggett has already proved popular with visitors who enjoy the comfort and facilities the boat has to offer.

The owners of Thames River Services, are all members of the 500-year-old Company of Watermen and Lightermen, signed the contract to build the vessel on 17th December 2012. It was agreed the vessel was to be called Thomas Doggett to emphasise the association with the River Thames.

The MV Thomas Doggett is named after Thomas Doggett (1640 – 1721) who moved to London in 1690 and was a noted celebrity around London. To celebrate the accession of George I to the throne of England in 1715 Thomas Doggett founded the race, now known as the Doggett’s Coat and Badge Wager. The race is the oldest continuously run single sculling race in the world and is run in conjunction with the Worshipful Company of Fishmongers. Doggett managed the race up to his death in 1721.  On his death, he left a sum of money to ensure the annual race continued and the organisation was passed to the Fishmongers’ Company, which has run the event since 1722 to the instructions laid down by Doggett.

Clements Engineering worked with the team throughout the build process, having specified the most appropriate stern gear package for the design of vessel and use.  The team have also been and visited the vessel and enjoyed a smooth and comfortable trip along the Thames.