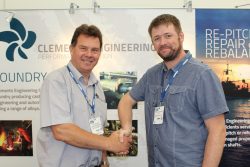 Now successfully launched, the 25m MO2 was initially awarded a 4-month contract on the Greater Gabbard wind farm.  Due to the efficiency of the vessel the initial contract was completed in just 2 months, resulting in the vessel being awarded the 2016 dive work.  The MO2 has now secured a long term 3 year fixed contract providing support on the same wind farm.

In addition to the savings made by the client, which over a 4-month operation can be in the region of several million pounds, the vessel also makes carbon footprint savings, working with more environmentally friendly systems and processes on board.

Clements Engineering work with customers from the initial design phase on new builds, ensuring that the stern gear and propellers are the best fit for the hull design, and also the primary usage of the boat.

Mainprize Offshore are continuing to build the range of very successful offshore support vessels with MO3 in build and further models in progress.  Their relationship with Clements Engineering is ongoing to ensure their customers are provided with vessels offering the maximum efficiency to keep up with current and future demands.