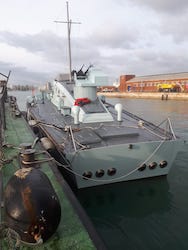 As the UK experienced the coldest weather for the winter, the Clements Engineering team were out on sea trials in the Solent, Hampshire.

The Portsmouth Naval Base Property trust have just completed a restoration on MGB 81, now, a fully operational high-speed historical World War II motor boat, which was helped with a £580,000 grant from the National Heritage Memorial Fund.

Clements Engineering designed and manufactured new propellers and shafts for the 71ft long vessel which is triple screw, 3 engines. The propellers were 28” 4 blade propellers designed specifically with the vessels engines in mind. The initial sea trials produced a speed of 31 knots.

When launched in June 1942, the gunboat was among the fastest boats of their type in the world. MGB 81 received the battle honour ‘Normandy 1944’ having made a significant contribution to the war effort saving the lives of many sailors and airmen.

The vessel will be available for charter, bringing history alive to those who experience it.

Clements Technical Sales Manager, Michael Major commented, “We have been very pleased to be part of this historic project, restoring the gunboat to full working order so that future generations can enjoy it and understand the role she played in our history.”